Remarks of the Deputy Consul General

The Honorable, Mayor Henderson Yarbrough, Sr., other officers and Trustees of the Village of Maywood, General Richard J. Hayes Jr. and the other officers of the armed services of the United States, Mr. James Opolony of the Proviso East High School, The Reverend Jacques A. Conway, Colonel Richard A. McMahon Jr., Major Edwin H. Walker IV, the Board Members of Maywood Bataan Day Organization (MBDO) and Honorary Director Leon Conner, Colonel Emilio Hidalgo and the members of the Filipino-American Veterans Post 509 The American and Filipino Veterans of World War II and their families, The officers and members of the American Legion, Department of Illinois Other distinguished guests, Good afternoon.

Seven decades ago, the onset of summer in the Philippines was significantly different than the previous years. The whole country was facing an uncertain future after the enemy forces (Japanese army) had overrun almost all islands of the Philippines. Despite the uncertainty and amidst relentless heavy bombardments and daily artillery fires from enemy forces, about 80,000 brave Filipino and American soldiers were holding out their forts in the Bataan Peninsula. Facing starvation, sickness, loneliness and the sweltering heat of summer, 60,000 Filipino and 15,000 American soldiers under the USAFFE (United States Armed Forces in the Far East) lowered their flags on 09 April 1942, more than three (3) months after Manila was declared an open city” and almost a month before the last Filipino and American forces did the same in the island fortress of Corregidor. The infamous Bataan Death March followed thereafter, where thousands of Filipino and American soldiers perished.

Today, we continue to honor and salute the brave men and women veterans of the Second World War for their sacrifices and heroic deeds.

Americans have their “Alamo,” Filipinos their “Tirad Pass.” Together they have Bataan. Bataan is the eternal link of two peoples — Filipino and American — with a common commitment to freedom and the ideals of democracy. Indeed, we are irrevocably cleaved together by the blood that was shed in the hollowed grounds of Bataan and Corregidor.
Bataan is and shall always symbolize the Americans’ and Filipinos’ commitment to the cause of freedom and to the defense of liberty and the ideals of democracy. On 04 April this year and in commemoration of the Bataan Day, the Philippine Consulate General in Chicago in collaboration with the City of Chicago Commission on Human Relations/Advisory Council on Veterans Affairs, Filipino and American World War II Veterans, the Filipino-American community and their American friends held a wreath-laying at the Bataan-Corregidor Memorial Bridge (City of Chicago) and a Program at the Freedom Hall (Kalayaan Hall) at the Consulate attended by Illinois’ Secretary of State Jesse White and Attorney General Lisa Madigan.

During the Program at the Consulate, an American veteran and a Filipina-American nurse during the war received from the Philippine Consul General Philippine World War II medals and their corresponding certificates. In addition to the Proclamation issued by Governor Pat Quinn declaring the month of April this year as “Bataan Day” in the State of Illinois, Proclamations on “Bataan Day” were issued by Chicago City Mayor Rahm Emmanuel and Village of Skokie Mayor George Van Dusen. Messages, letters of recognition and greetings were likewise received from Attorney General Lisa Madigan, Secretary of State Jesse White, Philippine Ambassador to Washington, D.C. Jose L. Cuisia Jr., U.S. Senator and Assistant Majority Leader Richard J. Durbin, U.S. Senator Mark Steven Kirk, and U.S. Representative Jan Schakowsky.

The copies of the Proclamations, Messages, Letters of Recognition and Greetings will be given to Colonel McMahon after my speech.

Also in celebration of the 70th Bataan Day, the Philippine Consulate General in Chicago sponsored the successful premiere screening on Memorial Day Weekend on 26 May
2012 of the award-winning documentary film “Forgotten Soldiers” at the Pritzker Military Library in the City of Chicago, and on 11 June 2011 at the Petty Auditorium, Skokie
Public Library. Among the viewers at the Pritzker Military Library were the Filipino and American World War II veterans, Major William Walker IV (ret.) and some Board Members of the Maywood Bataan Day Organization (MBDO), members of the Filipino community, American guests, and representatives from the American Legion and the Veterans’ Advisory Council of the Illinois Secretary of State Office.

The “Forgotten Soldiers” is a documentary movie about the United States Army’s Philippine Scouts who fought and held off enemy forces during the Second World War
(WVVII). The film is narrated by Hollywood actor Lou Diamond Philips and ten survivors of the war. A Platinum Multimedia LLC Production, the film was directed by Mr. Donald
A. Plata. Mr. Chris Schaefer is the Scriptwriter of the film.

As in previous years, this year’s Maywood Bataan Day Memorial Service is a continuation of the celebration of the “Day of Valor” (Araw ng Kagitingan) that usually starts during the month of April. Friends, in behalf of the Philippine Consul General in Chicago and the Filipino American community, I would like to welcome us all in this auspicious celebration of the bravery, sacrifices and heroism of the Filipino and American World Warll Veterans.

Before I close, I would like to convey our utmost appreciation to the Maywood Bataan Day Organization and the Village of Maywood for organizing the annual Maywood
Bataan Day Memorial Service to commemorate a historic and significant event.

God Bless America and the Philippines!

Thank you all and as we say in Filipino, Mabuhay (Long Life)! 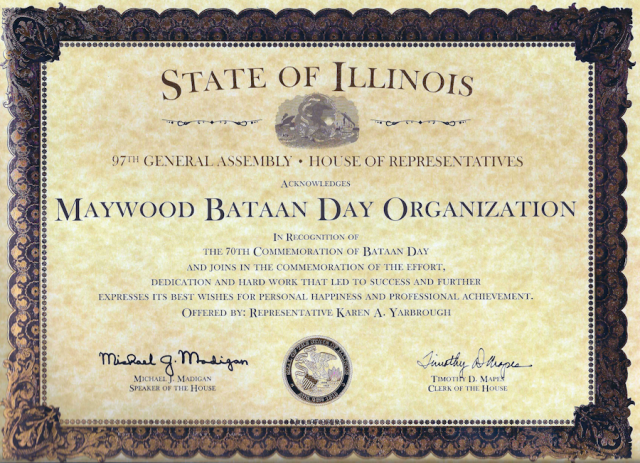 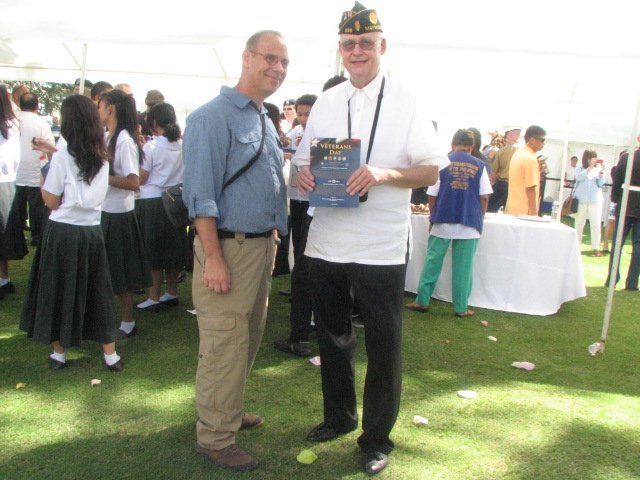