Here is the keynote speech presented by CSM Mark W. Bowman, Illinois National Guard at the 72nd Annual Maywood Bataan Day Memorial Service. Transcript follows video and additional information about CSM Bowman is at the bottom of this page.

Good afternoon everybody, I am Command Sergeant Major Mark Bowman. I am the CSM for the Illinois Army National Guard. Before I had this position, I was the CSM of the 33rd Infantry Brigade Combat Team. I have roots in Maywood, my grandmother lived here for almost 40 years. I remember playing on that tank when I was a little boy. At 17, I joined the Army as a tanker. I did that job for the first 15 years of my career. That tank had a role in that. My wife Karen, has family here. Her cousin Rick Rikelman had an uncle whose name was Sgt Raymond Mason.

He was a member of B Company. His tank hit a landmine and they were cut off from their infantry support. The Japanese ordered them to come out of the tank. They did and then they were told to run. They were then machine-gunned. Sgt Mason was killed; his crew were all wounded but made it into a sugarcane field. He was killed in action on the 29th of December, 1941. He was 24 years old.

After 5 long months of fighting and starvation, imagine being a p-o-w…..going weeks with little food or water. You have been beaten and abused at the hands of the Japanese. You pray, hoping god will hear you.  You want to see your family again,   just for a chance to tell them that you love them.  Now, you are forced to walk uncountable miles with only periodic sips of dirty water and a little rice.

You have no idea where you are going.  You watch as people near you are executed because they cannot keep up with the thousands who march beside you.  You see some beaten with rifles, stabbed with bayonets or shot for no reason.  Fearing you would be killed, you keep walking….even walking as you relieve yourself so you continue to blend into the crowd.  The sun and heat beam down on you for days as you wonder how much more you can endure.

Finally, after six days and nearly 65 miles you reach your destination….San Fernando.  You and more than 100 other men are crammed into a box car meant for only 30 to 40 people.  The box car is so hot and miserable that men next to you are dying from suffocation and heat exhaustion. Finally the box car stops and you are forced to get back out in the hot sun of Capas.  Now the guards tell you to walk….again.  You drag your weak body down the road.  Seven miles later you arrive at camp O’Donnell.  There, you are told to lay on your stomach and give the prison guards any last possessions you still had.  You watched as more people were killed simply because they had Japanese-made items or money on them.

This is what it was like for nearly 75,000 American and Filipino soldiers when they were ordered to surrender nearly 75 years ago.  It’s estimated that between 6,000 to 11,000 soldiers died during the transfer of POWs following the five-month battle of Bataan. Most of the soldiers who died during this time were Filipino.  Some historians say only 54,000 of the 75,000 prisoners made it through the march.  Of the nearly 15,000 Americans taken prisoner at Bataan in 1942, between 6,000 and 7,000 died during their three-and-one-half years of captivity.

Among these men were Maywood’s own Company B of the 192nd tank battalion, previously known as the 33rd Division Tank Company.   Their buddies at Proviso High School may have called them ‘weekend warriors’ but they became full-fledged warriors when the Draft Act was passed in 1940 and select National Guard units were called to active duty to prepare for a possible conflict with Europe.

The 33rd Tank Company was organized in May 1929 in Maywood and was inducted into federal service as Company B of the 192nd Tank Battalion in November 1940.

11 months later, in October 1941, 89 men from B Company left the United States for the Philippine Islands, only 43 of these soldiers would return.

Arriving only two weeks before the Japanese attacked, these men were well-trained, but poorly equipped, and greatly outnumbered.

And yet they did what American soldiers always do, they took the initiative and they fought – hard.

For five months they fought until, on April 9, 1942, they were ordered to surrender. They then began to display the strength and fortitude that few American soldiers have ever been asked to endure – the death march – followed by years of further abuse in prison camps in the Philippines and as slave labor in Japan, Korea, and Manchuria.

These soldiers – sons of Maywood – showed the whole world that American soldiers would pay any price for liberty and the defeat of tyranny.

This is the legacy B Company left the 33rd Infantry Brigade Combat Team as we deployed for combat in Afghanistan 2008.  Nearly 3,300 Illinois National Guard soldiers from 30 units within the brigade made up this deployment.

The 33rd IBCT traces its lineage to the 33rd Division, which includes Maywood’s B Company. As we deployed, we knew the proud legacy B Company had established. I truly believe that pride contributed to our success in Afghanistan.

The 33rd also lost 18 soldiers while we were deployed.  No matter what the scenario or how far into our deployment, it never got easier.

But, just as our fellow soldiers had at Bataan, we endured and we fought hard.

In a sense, I believe the soldiers of Maywood’s Bravo Company still serve alongside us. They were there in Afghanistan with us. Their strength and spirit is present with the soldiers of the 33rd and the entire Illinois National Guard today.

As General George Patton once said: “Courage doesn’t always roar.  Sometimes courage is the quiet voice at the end of the day saying, ‘I will try again tomorrow.’”

Those who endured the Bataan Death March and years of captivity never stopped trying. Many gave their last full measure of devotion. Others lived to tell the story, ensuring the sacrifice of these men and their families will never be forgotten.

We stand together as Americans.

And today we are also members of Bravo Company, from Maywood.

We remember the service and sacrifice of these soldiers, forever young.

On the 72nd year of these heroic acts, we vow to never forget the pain and suffering these soldiers endured.  These heroes may be gone, but we will to ensure their memory never fades away. They and so many others, set the example for us to follow, and we will, thank you. 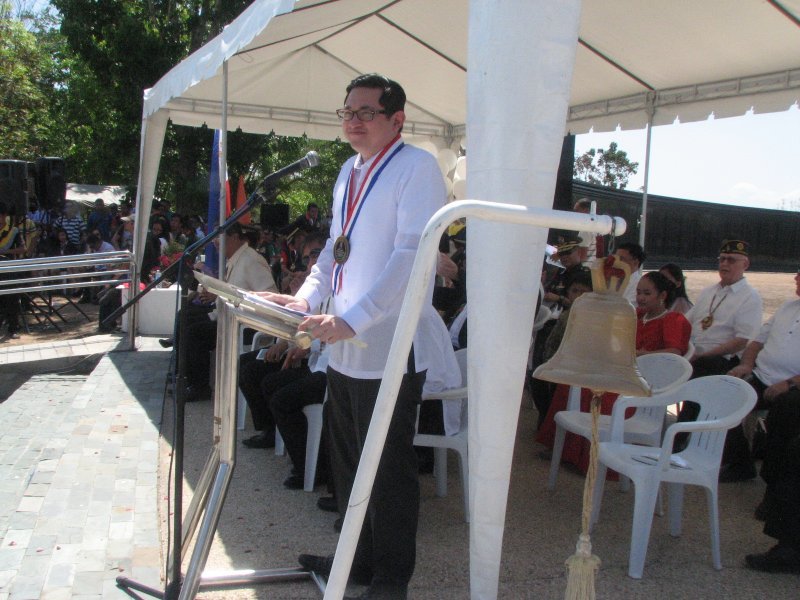