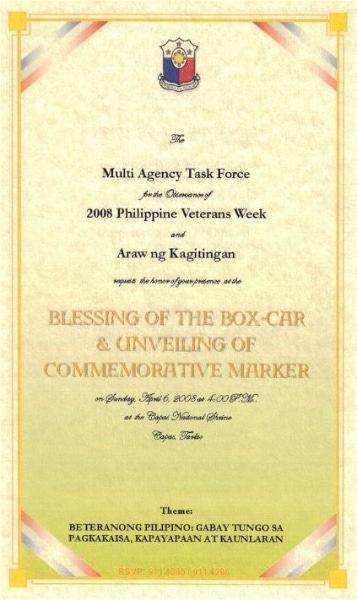 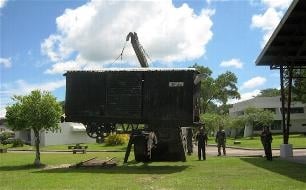 The New Site of the Boxcar 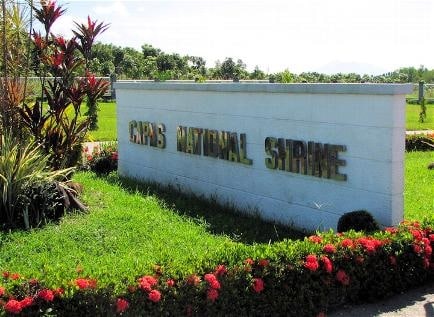 The Battling Bastards of Bataan Camp O’Donnell Memorial for the American military that died at the Japanese Camp O’Donnell POW camp is also located in the Capas National Shrine near the Box Car. 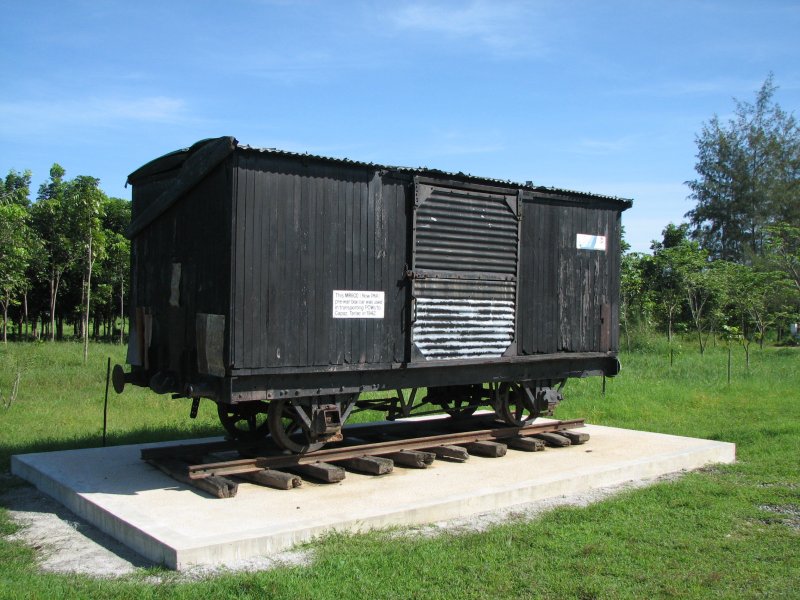 The Story of the San Fernando Box Car Relocation

From an email received by President McMahon

In 2005 my husband and I moved to San Fernando City, Pampanga from Makati City. That’s when I came to know more about the Death March and World War 2 in general because I hail from the province of Negros Occidental. As you know the 71st Division of the Philippine Army USAFFE were from Negros.

In 2005, the TV channel IBC 13 used to show a documentary film called, “Legacy of Heroes” and its about WWII. It was a project of former Defense Secretary Retired General Angelo Reyes. The Battling Bastards of Bataan (BBB) actually sent me a DVD version of that program. Through that program, I came to know that it was in San Fernando Train Station where the Bataan POWs boarded the box car that would bring them to Capas Tarlac. I went there, saw the place and traced the marker back to Bataan. I also Went to Mt. Samat, KM 00, in Mariveles and Bagac Bataan.

Bagac is very important to me because it was where my grandpa and the rest of our relatives were captured and started their Bataan Death March.I then followed the marker from San Fernando City up to the train station in Capas Tarlac and up to Camp O’Donnell hoping to find the graves of my grandpa and his relatives, only to find out that their remains have been transferred to Libingan ng mga Bayani in Makati City.

I did a lot of research also on the internet hoping that somebody could help me find the grave of my grandpa and my relatives. It was then that the BBB contacted me which lead me to meeting Mr. Litton who accompanied me to the Libingan ng mga Bayani so that I could locate the grave of my grandpa and our other relatives which we did and I attached small nameplates to their crosses. There is no grave for others because they died in the battlefield. All in all, WWII claimed 5 lives in our family.

Because of this I became very curious about WWII and wanted to know more so I went to Camp Aguinaldo and came in contact with the Military Shrines Services and the DBC.

In 2006, my husband, a Mason, and I went to Isabela province (further north) for a business trip. On our way back we decided to change route. Instead of going straight from Isabela to Nueva Ecija to Pampanga, we went first to Tarlac before heading to Pampanga. That’s when we passed by Camp Servillano Aquino in front of Hda. Luisita Industrial Estate. There is a military museum there and some old planes, helicopters, tanks and other military hardware was displayed.

Because I am very curious about anything regarding the war, I told my husband to stop for a while and look at the museum. Inside the museum, WWII military paraphernalia was displayed and just a few meters away from the museum, the lone box car was displayed. I talked to the guard regarding the box car and he confirmed to me its authenticity. The only problem at that time was there was someone dwelling on it.

After my discovery, I spoke to the commander of the BBB, Chief Tillman Rutledge and he was very keen to save the box car. He said it should be displayed in a place where its significance will be noticed. Also through the BBB I came in contact with FAME represented by Mrs. Leslie Murray who signified FAME’s intention to help in the preservation of the box car. To complete the picture, Col. Rafael Estrada of the DBC joined the force.

I arranged a meeting for all of them with the City Mayor of San Fernando City because they agreed that the box car should be displayed at the train station of San Fernando because that’s where the soldiers boarded the train. Mr. Litton, Mrs. Murray and Col Estrada attended the meeting. The Mayor was very enthusiastic about it, but after that we havent heard a thing.

The plan was to turn the train station of San Fernando City into a museum. BBB wanted to fund the project. All they requested from the city was to remove the squatters around the area and to fence the building so that it will be protected. Then the DBC will help in transferring the box car as well as FAME in putting up the museum and also in preserving the box car. But after that meeting nothing happened.

But I never stopped looking for help. Also, Mrs. Murray and Col Estrada decided that because of the lack of interest by the city of San Fernando, the box car instead must be transferred to Camp O’Donnell, the best place for it to be seen and protected and appreciated by those who will come and visit Camp O’Donnell.

In 2007, hope came. I have known in the research that the Masons were very much involved during WWII. From Gen. Douglas MacArthur, Gen. King and the rest of his officers to Pres. Quezon and Justice Jose Abad Santos. Since my husband is a Mason I asked him to help me, especially since their Masonic lodge is named after justice Jose Abad Santos. I told him to asked hs brothers especially those who are in the military to help. So in April 2007, the solution to the problem came.

The annual communication of the Masons was held in Angeles City and my husband’s lodge together with the other lodges in Pampanga became the host. At that time, the Secretary of the National defense was retired General Hermogenes Ebdane. I was very sure that he would be attending the meeting so I wrote him a letter. My husband handed it to him during their meeting.

After he read my letter, my husband said, he called up his Undersecretary Gen. Carolina regarding the matter. Right then and there, Gen Ebdane told my husband that the problem was solved. Mr. Litton also wrote him a letter representing BBB, as well as Mrs. Murray representing FAME. The Masons did make the thing happen and really, it is they who made the transfer possible. All I did was to write Gen. Ebdane a letter, that’s why again I want to say that my participation was minimal. It was the Masons and of course the military who made it possible.

I am doing what I am doing for the WWII heroes, because I am grateful for what they have done and most of all to my grandfather. I want to give value and meaning to his sacrifices. He left my grandma pregnant with their child, my father. He never came back. He died in Camp O’Donnell in 1942 and in 1947, my grandma received his death certificate. After that she did not know what happened next. Every year my parents do come over every Bataan week to participate in the celebration.

Few months later, Mr. Litton informed me through email that Gen. Carolina wrote him a letter saying that the box car will be transferred in due time and that the Military Shrines Services will find a suitable location for it in Camp O’Donnell.

Sometime between August and September 2007, my friend who works for the MSS phoned me up that the box car would be transferred on that day, so I was there to witness the event. These are pictures from that transfer. 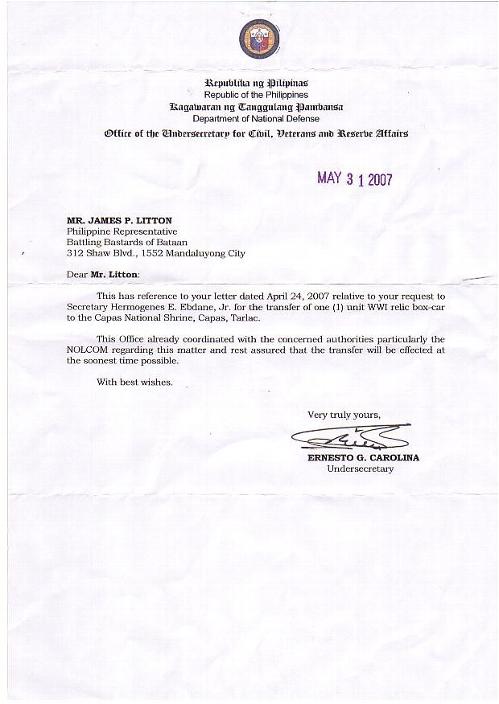 From an email received by President McMahon:

Dear Indira – It was only fitting that you be recognized for as I said before, if it were not for you having sharp eyes and actually spotting the box car – it would not have been “saved” !! — and of course there must be credit to Gen. Hermogenes Ebdane, Jr. and to the Masons for getting it moved…and am sure that will all be recorded publicly in time in print in some form…signs at the box car and in future articles and writings to record this event…

But first and foremost must be the recognition to you for having sighted it — and then working so hard, with Ebdane, Carolina, Estrada, etc to get it moved to a safe and secure place so that it – in its role as a witness to the horrors and atrocities of the Bataan Death March – will be seen by all who pass and record WWII history — what an incredible relic to have, to be seen! To read about “POW’s being loaded onto box cars and transported to Camp O’Donnell” is one thing…but to SEE the actual box car….what an impact that is!!

Now we must all work to get it properly sheltered from the elements — it is very exposed and with the typhoon season coming…must do something no matter how temporary – while we work for a permanent cover.

Leslie Ann Murray is an official with the Filipino-American Memorial Endowment, Inc. (FAME). FAME, among other activities, administers the Death March KM Marker program. Our MBDO Marker at KM 102 and my personal marker at KM 101 were purchased through FAME. As a very young child, Leslie Ann and her folks were held by the Japanese at the Santo Tomas Internment Camp — Pres. McMahon 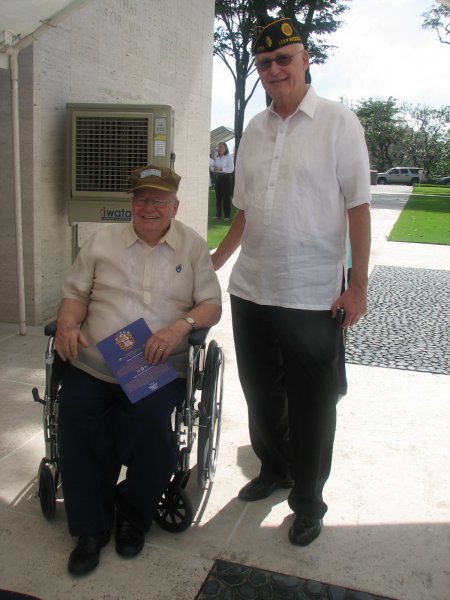