Co. B Survivor Among Honored Guests

Co. B’s own Lester Tennenburg, also known as Lester Tenney, is part of a group of Bataan veterans who attended a recent screening of documentarian Jan Thompson’s new project “Never The Same”. Recently, Jan had a showing in Los Angeles, which was attended by not only many Hollywood celebrities (like Loretta Swit, Robert Loggia and Mike Farrell), but also by 10 former Bataan POWs. Lester was also there. More information on the film, as well as the LA event, is available on the American Defenders of Bataan and Corregidor – Descendants Group website: 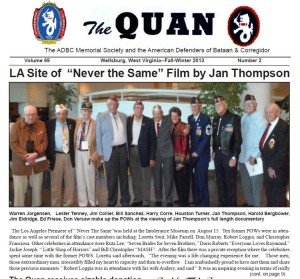